Founded in early 1978, the VWC started with a group of women who saw the need for an organization dedicated to improving the quality of life in the San Lorenzo Valley, for this and future generations. Within a few months of its inception, the VWC had made a name for itself as an organization working to empower people; the membership had expanded and men were becoming active in its activities as well. The name was important to keep because it was the inspiration of women that got it going, and there was a little tongue-in-cheek fun that this group of community activists might surprise people expecting white gloves and polite small talk. The name has, of course, been the object of much fun over the years; a favorite was the comment of then-Supervisor Joe Cucchiara who once introduced the VWC as a “BROAD based organization!” It’s obvious that men are not intimidated by the name, since about half of our members are men.

Within a year the VWC had by-laws and status as a 501-c-3 non-profit corporation. 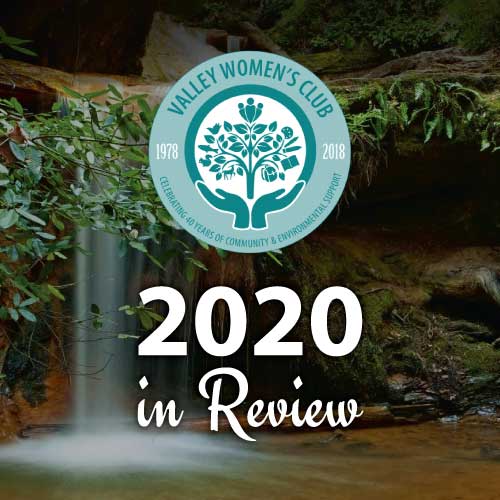 Over the years the VWC has realized a wide variety of accomplishments, from founding the first recycling center in the SLV in its first summer (now grown to three, 7 days/week redemption/ recycling centers), to provide the inspiration and impetus for many other organizations such as the Boulder Creek Friends of the Library, the Valley Resource Center, the Storm of ‘82’s Disaster Center, leading to a major Neighborhood Preparedness Plan, and other local groups.

Early on, the VWC helped prevent the potentially disastrous environmental degradation threatened by the development of over 400 homes off Big Basin Way and helped demonstrate the importance of our Watershed by distributing over 3,000 copies of the Watershed Management Plan summary. Since then VWC members have taken stands and attended and spoken at hundreds of public meetings and hearings and events on environmental issues, from septic regulations to timber harvest plans. The VWC led the effort to “Save the Felton Meadow” as a primarily open space.

From sponsoring poetry readings, and even Heavy Metal Concerts for local teens, the VWC turned to support local artists and artisans with the first one-day Highlands Faire. This grew into 18 years of the magnificent annual two-day Redwood Mountain Fine Arts & Crafts Faire and Music Festival ­ commonly called “The Redwood Mountain Faire” — which raised many thousands of dollars for local non-profit organizations while providing entertainment for the entire community ­ and exposure to thousands of visitors, attracted by the big-name performers, for the local artists and craftspeople and musicians which were given a chance to display and perform and win awards at the Faire.

The VWC provided funds for the original Highlands Park play equipment and the excellent gallery lighting inside the Highlands “mansion.” We responded to a tragic traffic accident with The Highway 9 Safety Campaign, helping bring major safety improvements by CalTrans, and improved safety enforcement to Hwy 9. Seeing the need for financial help for single parents seeking to return to school, the VWC has held successful Mayan Sales and Yard Sales for many years, raising funds for its Single Parent Scholarship ­ a $500 per semester gift to be spent as needed by the recipients.

We benefited from the attendance by some of our members at the UN Conference on Women in Beijing ­ and the on-going effort to pass the Convention on the Elimination of All Forms of Discrimination Against Women (CEDAW), and to create a local CEDAW ordinance. The VWC has actively supported the “Expanding Your Horizons in Math and Science Conference,” a day-long event, now in its third year, which provides workshops on opportunities in math and the sciences for 9th through 12th-grade women, to inspire them to remain in math and sciences courses throughout their education.

The VWC has sponsored an art show on the environment at the Mountain Art Center, regularly publicized the performances of Mountain Community Theatre, provided traffic safety for the Boulder Creek Halloween Trick or Treating, helped start the Valley Unity Action Group in response to acts of racism in the SLV, provided self-defense courses for women and children, sponsored regular Candidates’ and Issues’ Forums at election time, taken stands on those issues (but never on a candidate for office) . . . the list goes on and on.

The VWC has empowered dozens of people, providing them with the skills and support to take stands and make changes.

Over the years the VWC has received recognition and honors from the Board of Supervisors, the State Parks Department, the California Resource Recovery Association, the Environmental Protection Agency, the Federal Emergency Management Agency, the Santa Cruz County Women’s Commission, the Coastal Conservancy, and many other organizations, for its broad range of activities. The Valley Post named us the Organization of the Year for 2004.