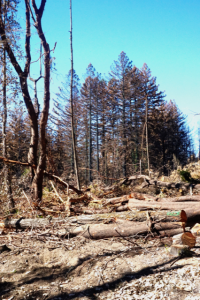 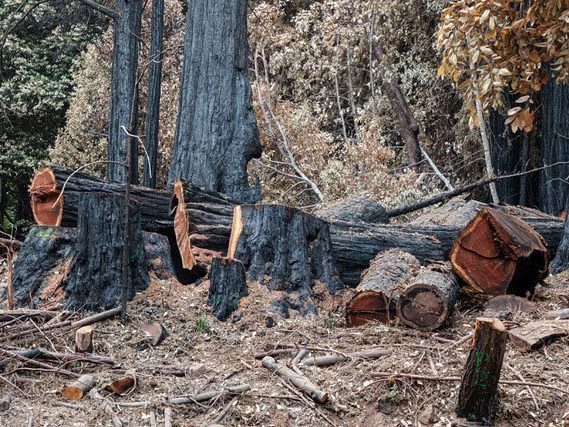 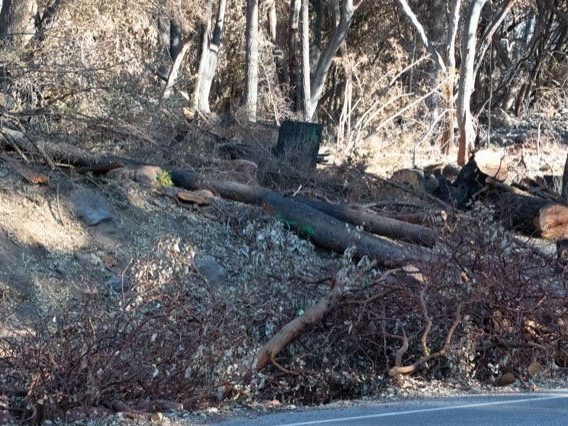 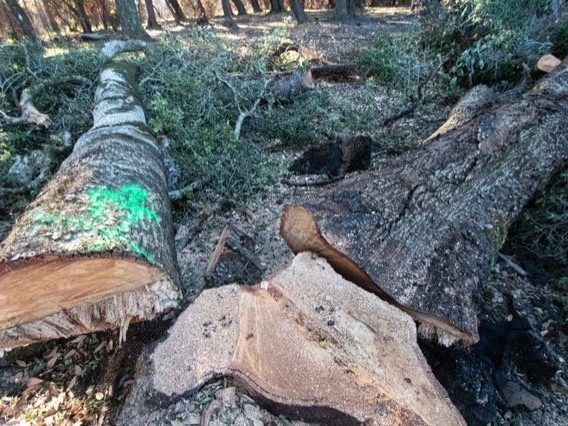 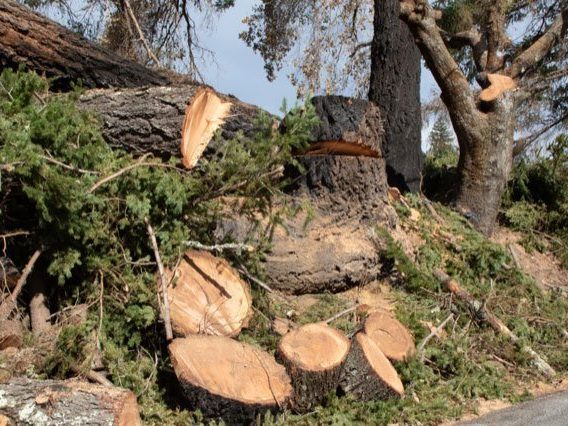 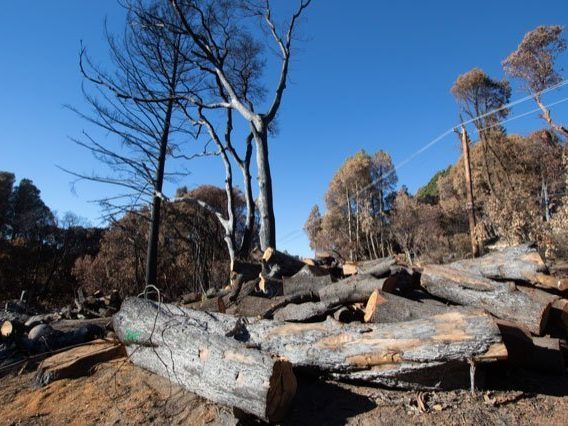 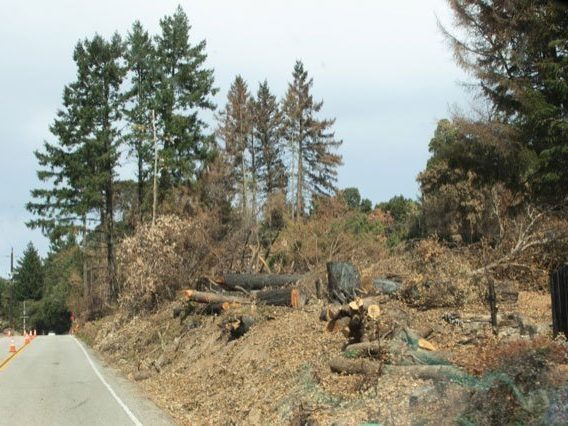 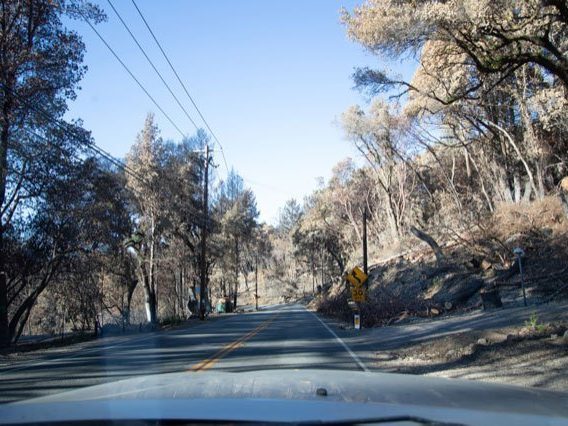 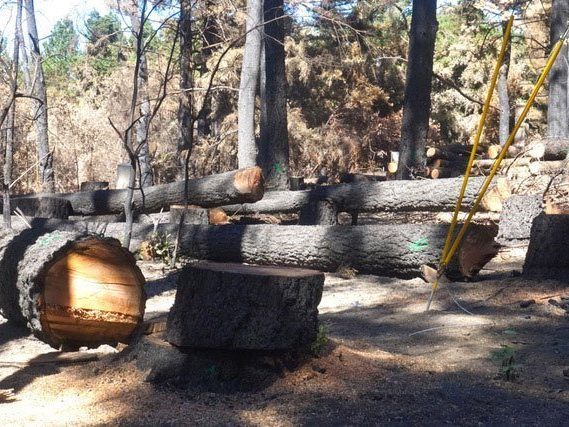 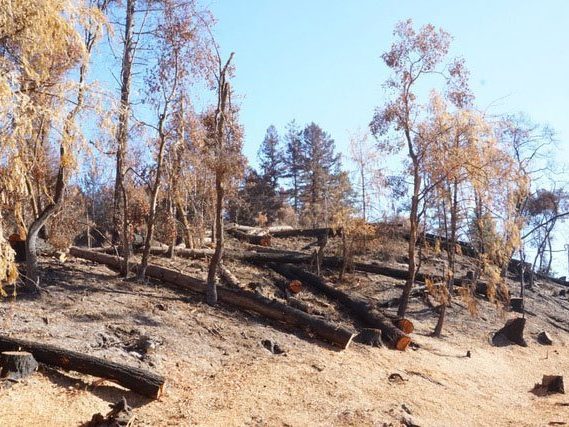 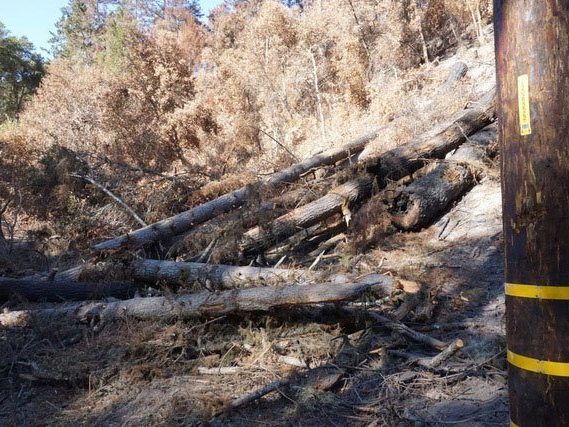 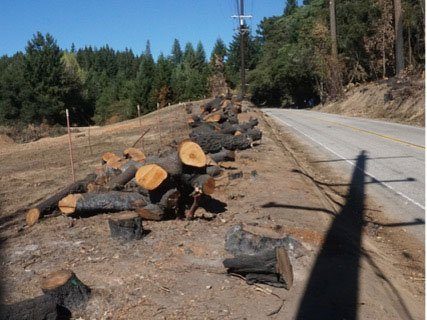 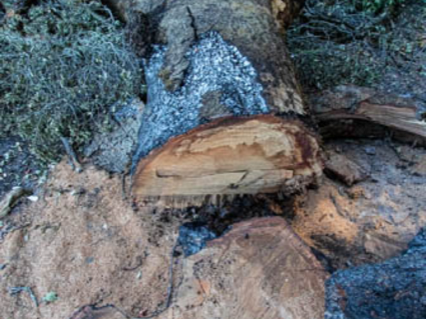 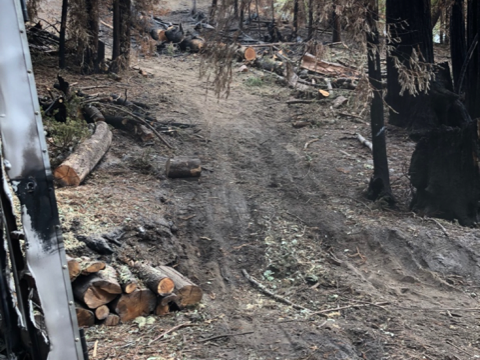 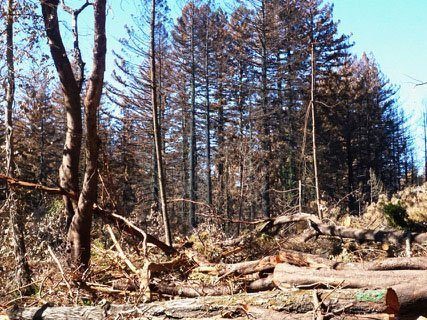 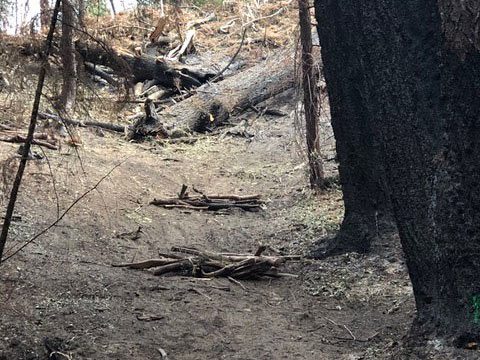 All photos were included with the following correspondence.

Dear Members of the Board of Supervisors, County Counsel Heath and County Administrative Officer Palacios,

As your constituents and residents of Santa Cruz County and the San Lorenzo Valley and Bonny Doon, we are requesting that the Board more closely examine PG&E’s actions following the CZU fires.

We are concerned that PG&E is using the fire aftermath to run roughshod over the rights of property owners, and to accelerate their ill-conceived tree-removal program. In many cases, without the owners’ permission or even knowledge, they are cutting healthy, only superficially damaged trees, flagrantly mischaracterizing them as “hazard” trees. This is occurring in spite of requirements to contact and get that approval from homeowners, failing to get approval even when cutting far outside the legal right of way. PG&E is detrimentally overstepping its authority. Its contractors are removing living trees that could prevent erosion and provide other safety benefits, without sufficient accountability or oversight by PG&E itself or any County or State agency. This is a violation of property rights and will hamper fire recovery in the Santa Cruz mountains, slowing the restoration of the forest, an essential County asset.

Unnecessary tree removal increases the danger of erosion, even lethal mud and debris slides, in the burned zones, exposing residents to possible harm, endangering forest recovery and undermining wildlife survival by destroying remaining habitat. This vegetation mismanagement could increase the impact of a catastrophic debris flow. We are gravely concerned that the County may be held liable if it fails to protest the excessive, unnecessary removal of trees.

We question PG&E’s reasons for such extensive clearing, in clear violation of best science, and have urgent concerns that it is simply being done for PG&E’s future convenience in avoiding GO 95 required trimming, and for conducting drone and helicopter inspections of the lines. PG&E has shown continued lack of regard for the health or safety of these forested areas and their residents. There is also the issue of what is being done with the felled timber. PG&E has recently announced that it is leaving the “wood” since the trees are owned by property owners. However, PG&E should be required to remove the slash and/or the logs if the property owner requests it, since it is a massive financial burden added to the already beleaguered fire victims.

This reckless action of PG&E will also, in the longer term, hinder local water districts’ ability to use these areas as part of our water collection system, as living trees provide vital important benefits in retaining rainfall, allowing percolation, and maintaining a healthy surface, ground, and aquifer water supply.

This urgent issue compromises the safety of the people of Santa Cruz County. There needs to be an informed, independent assessment of the viability of the trees and the impacts of their removal. Due to the imminent risk to health and safety, we implore the Board to take immediate action to obtain an injunction halting this destructive and dangerous behavior. This injunction should include a requirement that PG&E contact individual property owners of impending arborists’ inspections, and allow them to bring in their own arborists and experts to identify any hazard or danger trees; it should limit any cutting by PG&E contractors until compliance and adherence to THP regulations and other regulations as defined by County ordinance, State Department of Fish & Wildlife, Regional Water Quality Control Boards, the Coastal Commission and CalFire, are guaranteed. This needs to be an open and public process, since PG&E, despite their PR efforts on television and Next Door, continues to act with impunity as an autonomous entity, disregarding public safety, property rights and environmental science.

Additional actions the Board should immediately pursue to assure public safety includes the following:
1. Contact all affected property owners about their rights regarding trees being cut down on their property; 2. As a Party to the Wildfire Mitigation Plan Proceedings, file an official comment letter AND file a separate formal Complaint about PG&E’s behavior; 3. File a complaint to the Board of Forestry to investigate whether PG&E has been conducting post-fire tree removals both within and outside of the Right of Way, without a required Utility Exemption Permit.

Thank you for your careful consideration. Please see the attached photos and links, in demonstration of the untenable nature of tree removals currently going on in the fire areas. We are available for further discussion and can provide additional documentation, including scientific research.

Get a clear picture of PG&E’s broken promises, and the impacts on their lives, from the experience of Nicole Sallak Anderson, well-known author, Bonny Doon resident:  Read her blog post.

PG&E’s WMP was approved by the CPUC, but only after hundreds of conditions were imposed by The Wildfire Safety Division (WSD). These conditions ranged from clarifying conflated data to failing to fulfill requirements. PG&E’s website only discusses what they feel are the benefits of the plan, ignoring its failures and weaknesses.

Our analysis of the 500-page WMP found profoundly important, basic issues that were ignored by the WSD and the CPUC in approving the WMP “with conditions.” Especially significant are the complete failure to include upgrading over 7,000 miles of antiquated, unsafe bare 6-gauge copper distribution wire in Tier 2 and Tier 3, high utility-associated wildfire danger areas, and also the lack of commitment to the rapid installation of computerized circuit breakers such as high impedance arc fault interrupters throughout those areas to begin with – plus no plans to underground lines in forested areas of special vulnerability. Instead the focus of hundreds of millions of dollars is the currently on-going removals of healthy, mature trees inside and outside of the ROW, including old-growth redwoods, heritage cedar and oaks and more important California native species of trees. Ignoring those most basic of decades-delayed safety improvements guarantees that we will all be dealing with PSPS and utility-caused wildfires for decades to come, and millions of trees will be unnecessarily cut down – a sacrifice to PG&E’s profit driven “run to failure” business model that provides greater profits and administration bonuses.

Here are the names of individuals who have been affected by PG&E’s on-going efforts to irresponsibly denude both their ROW and within striking distance outside that ROW, and the massive increase of this in fire devastated areas, and/or who have been analyzing and participating in PG&E issues for years – and are willing to discuss this with county officials and the media.

Along with the following photos, please find additional photos by Jodi Frediani, Kevin Collins and Nancy Macy, illustrating the massive trees removals of every species, many yards from the distribution line’s right of way (ROW) — all reportedly without CalFire Utility Exemption Permit as required by law, and without notification and approval of landowners.

Jodi Frediani included this photo of a (formerly) magnificent heritage live oak, over 75 feet from the ROW, burned but still living with good chance of recovery. It should have been protected. 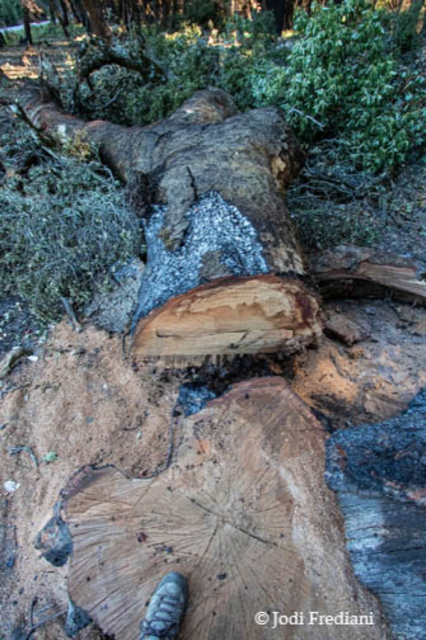 Kevin found that it is apparent that trees were cut down whether badly damaged or not.

These many hardwoods in Bonny Doon were removed from outside the ROW — all chance for restoration gone, when they should have been left for spring and possible new growth as advised by the Resource Conservation District (Rich Casale and others) in discussing erosion control with fire-affected landowners. 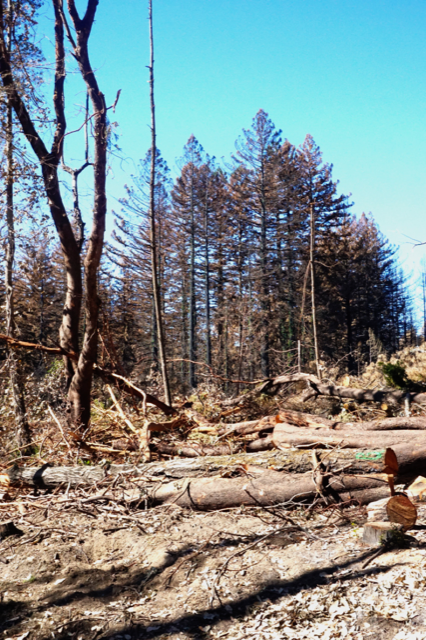 This photo by Nancy Macy of Boulder Creek shows an extremely steep slope on the property of long-time residents Linda and Chan Moore’s. The photo shows one of two brand new, wide “roads,” up that ash-covered slope, cleared and bulldozed by PG&E. The entire slope is now threatened with even more severe erosion due to all the downed trees. Linda explained, “They devastated it, taking down all the trees, not just the taller few impacting the wires. We told them that many of the trees, even though burned, could have come back, as we had been advised by Rich Casale of the Resource Conservation District. Rich cautioned us to leave them until Spring for erosion control and to give them the chance to sprout new growth. So, I had told PG&E’s contractor to leave the trees that were not directly affecting the wires. However, they cut down virtually every tree any way, leaving heaps of slash and wood, a significant potential fire disaster. It was no surprise when there was a spot fire that restarted in all the slash and wood they had left behind. Thankfully, Boulder Creek Fire was able to put it out. Since then, after we again complained, PG&E crews returned, clearing out much of the slash and claimng they installed erosion measures. However, instead they left us with a highly erosive, steep slope, completely bare, with new vulnerable erosion areas, each as wide as a road — and more slash above.”

One of two access roads cut so PG&E could cut down dozens of trees to replace poles to Linda & Chan Moore’s house that was encircled by the fire’s devastation, threatening further damage. Photo by Nancy Macy 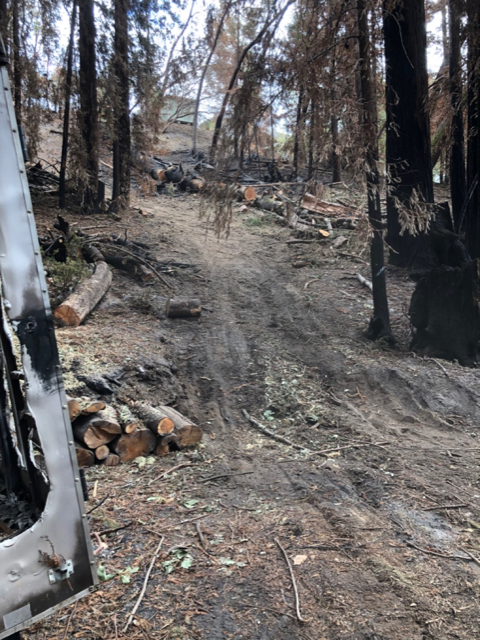