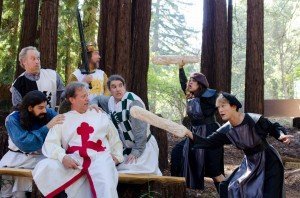 Spamalot is written by Eric Idle, with music by John Du Prez and Eric Idle, and was nominated for 14 Tony Awards, winning three, including Best New Musical.  It is a hilarious blend of absurdity and charm, and audiences will embark upon a satirical journey through the middle ages with King Arthur and his knights who are searching for the Holy Grail.  Arthur and his men encounter rude Frenchmen, killer rabbits, and the Knights who say “Ni,” on the road to the famed Camelot. Favorite Monty Python treasures include the songs, “I’m Not Dead Yet,” and “Always Look on the Bright Side of Life.”  The production sparkles with witty bantering, legendary characters, and rollicking musical numbers, sure to delight Python fans old and new alike.

This play contains adult language and is intended for mature audiences.