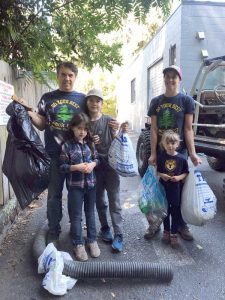 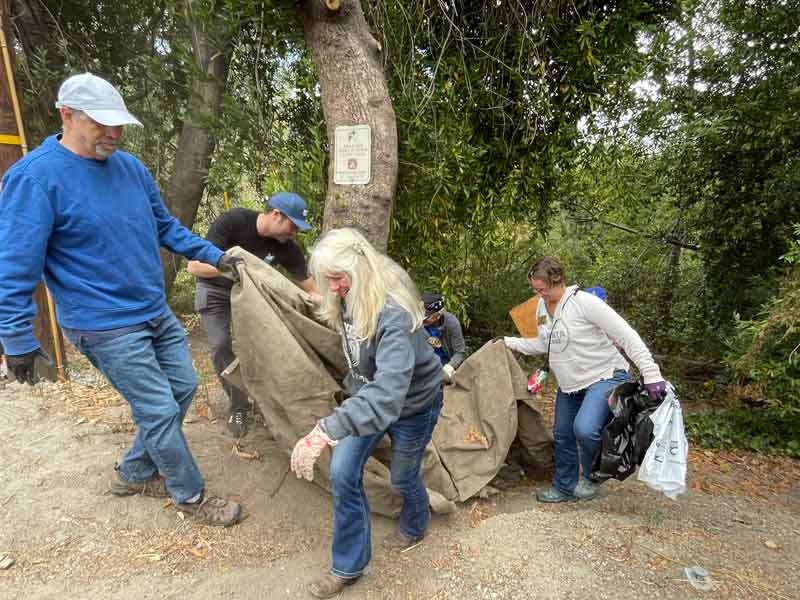 On Saturday, September 17, over seventy volunteers made the 36th Annual SLV River & Road Clean Up a major success, removing over 3,300 pounds of debris along the River, its creeks, and nearby roads.

From age 3 to 80, brave volunteers clambered down embankments, walked and waded for hours, filling bags with recyclables or trash and dragging filthy objects to the collection sites. Valley Women’s Club and Save Our Shores volunteers weighed and counted items and prepared the materials for the County’s energetic workers to load into trucks and deliver them to the Ben Lomond Transfer Station later in the day. They enjoyed a perfect morning for the daunting task, just before the Sunday rain.

The Valley Women’s Club has organized the annual cleanup event since 1986, supported by Santa Cruz County and the SLV Water District. Eleven years ago, Save Our Shores decided to bring its Coastal Clean Up further up the San Lorenzo River, and the non-profit organizations soon began working together.

In Boulder Creek, Ben Lomond, and Felton, piles grew as large amounts of plastic, hundreds of cigarette butts, and household appliances (toaster oven and water heater included) were collected. By the end of the day, over fifty huge black bags filled with refuse and some hefty metal objects were hauled in by volunteers.

In Felton, early arrivers joined Save Our Shores’ site “Captain” (and SLV Rotary Member) Linda Deal and Valley Women’s Club Environmental Committee member Brackin Andrews. They ran the Covered Bridge sign-in/weigh-in site. SLV Rotary members proudly brought up heavy items they found bogged down in the River. Other hardy volunteers went up San Lorenzo Rd. to a steep-embankment dumpsite, up by the Quarry, where people illegally dumped piles of filthy items. They filled a large pickup truck and doubled the size of Felton’s haul.

In Ben Lomond, families and individuals laboriously filled bags with hundreds of cigarette butts and litter carelessly discarded along the town’s streets and the River. Those smaller items cause severe harm to wildlife. Site Captain Jasmine Paredes and helper Sarah Bartos were delighted by the turnout.

In Boulder Creek, a few dozen volunteers, including ten youngsters, scoured Junction Park, several sections of the River, and the turnouts on Hwy 9. The materials they found were brought to the collection site behind The Mat - Boulder Creek Laundry, staffed by Boulder Creek SOS Captain Inabel Uytiepo and her husband, O’Keefe Madora. The mountain of trash included a water heater, tires, a blue plastic baby bathtub, and at least twelve large bags of mostly CRV beverage containers – back to being litter since the Boulder Creek and Felton recycling centers closed.

“Each resident of the San Lorenzo Valley can help make everyday River & Road Clean Up Day by removing the trash from along their road frontage or from the pull-outs along Highway 9 and other major roads. Take the time to pick up litter to protect our waterways and wildlife from cigarette butts, plastics, and other contamination,” urged Environmental Committee Chair Nancy Macy. “Everyone can help protect the watershed year-round.” 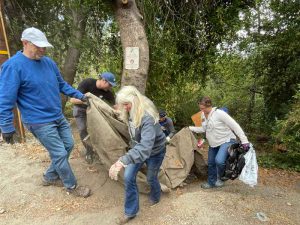 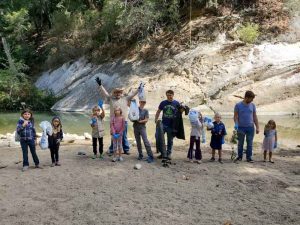 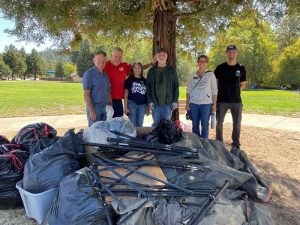 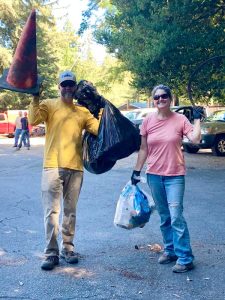 Mark Koenig and Shelly Zubey bring a huge load of trash to the Boulder Creek collection site behind THE MAT Laundromat. Photo by Inabel Uytiepo. 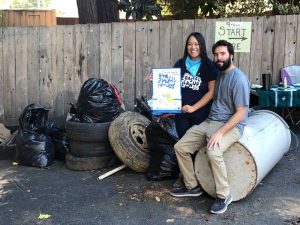 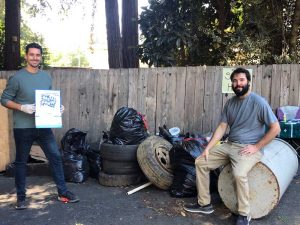 Steven Reid and O'Keefe Madora happily pose by the ever-growing heap of materials dragged from the River and along the nearby roads. Photo by Inabel Uytiepo. 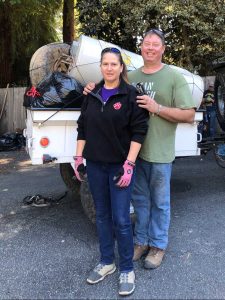 Eli and Judi Casey were the Boulder Creek Champs, bringing in 509 pounds, including a water heater dumped along the road. Photo by Inabel Uytiepo. 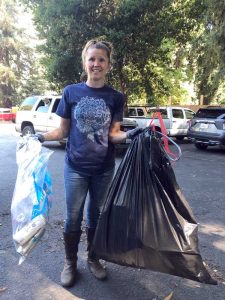 Local artist Gemma Locatelli joined in the work, cleaning up along roads leading to the River. Photo by Inabel Uytiepo. 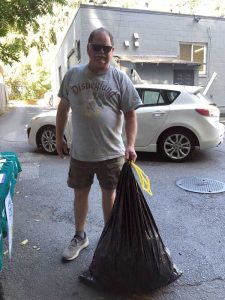 Bob: Let us know your last name! Thanks for your help! Photo by Inabel Bee Uytiepo. 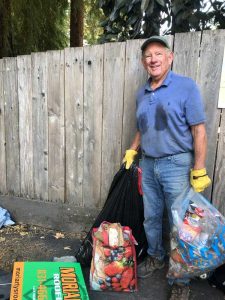 Bruce McPherson makes it to the Boulder Creek site after working in Felton and Ben Lomond! He found a lot of recyclables - sadly, there are more of them since the SLV Redemption/Recycling Centers closed in Felton and Boulder Creek. Photo by Inabel Bee Uytiepo. 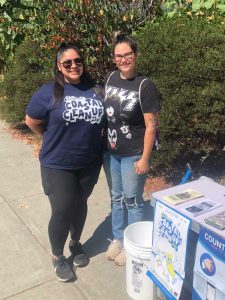 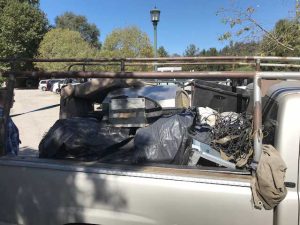 The mess dumped up San Lorenzo Ave. filled Jean and Tom Antisdel’s truck. They used a rope to haul heavy items and bags they’d filled with trash up the steep embankment. Photo by Brackin Andrews. 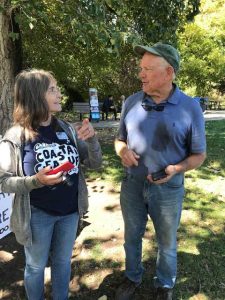 Linda Deal and Supervisor Bruce McPherson discussed the events of the day. Supervisor McPherson went to each of the three SLV sites and helped at each one for an hour, helping assure the event's success. He has participated in every event since he first campaigned for Supervisor in 2012. Photo by Brackin Andrews. 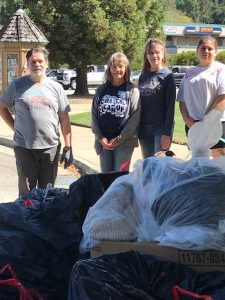 Eugenia Grapa, Linda Deal, Michelle Grapa and Camille Grapa. Linda, Felton resident, was Captain of the Felton site. She took special training from Save Our Shores and tracked all the materials for SOS to add to their statistics for the annual International Coastal CleanUp. The Grapa Family worked hard to bring in many bags of trash to add to the heap. Photo by Brackin Andrews. 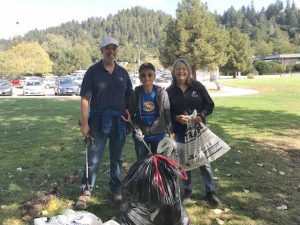 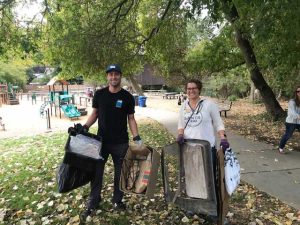 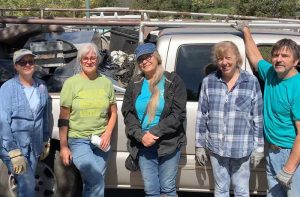 Proud Felton residents show off the truck-load of heavy, filthy items pulled out from a dumping spot on San Lorenzo Ave. up near the Quarry. From the left, Andrew Gliesman, Kim Armstrong, Beth Ahlgren, Barbara Hanson, Jean Antisdel and Tom Antisdel. Photo by Brackin Andrews. 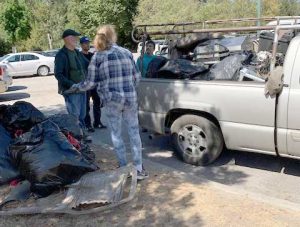 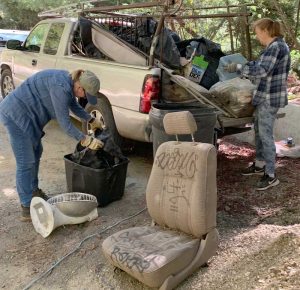 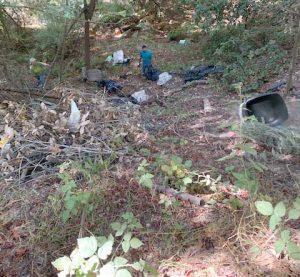 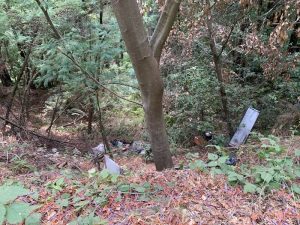