Searching for Wildlife: Council of All Beings 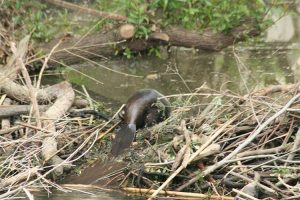 (Note: The local Council of All Beings was the brainstorm of long-time Environmental Committee member, Cathleen O’Connell. The Council’s goals are based on the idea that we need to increase our understanding of the plants and animals that make up our local ecology in order to embrace a life style that will help protect and improve the environment so crucial for their well-being, and finding that there are many ways to achieve this – from studying a single plant or animal, to making art, to sharing field trips and stories. Here is a recent report.)

A couple of weeks ago, a few of us Council members made a field trip up to the San Francisco Bay-for a beaver festival. Here’s the story:

In 2006 a couple of beavers turned up in a small trickle of a creek in downtown Martinez. Martinez is a town on the Carquinez Straits (where the Sacramento River enters the San Francisco Bay). The western side has a quiet old-fashioned downtown, the eastern side is an agglomeration of oil refineries. Soon after the beavers built a dam the city determined that the dam posed a flood risk and decided to kill them. Residents objected-in fact they formed a pro-beaver organization called “Worth a Dam”! After some citizen agitation the city then proposed relocating the beavers. To quote from the Worth a Dam brochure : “A dynamic and crowded Council meeting forced the city to form a beaver subcommittee to study the issue further.” Ultimately, the fear of beaver-caused flooding was dealt with in a way which allowed for beaver-human co-existence: “Beaver expert Skip Lisle was hired to install a flow device that could maintain the dam at a safe height.”

There were between 60 to 400 million beaver before Europeans immigrated to North America, but it’s estimated that the West has only 10% of our beaver inhabitants remaining. Beaver are a ‘keystone’ species because they create wetlands which provide habitat for salmon and steelhead (which have no trouble navigating their dams) as well as other plants and animals. The banks of this downtown Martinez creek are now lined with native willows and lush beds of tule. Since the beavers’ arrival, steelhead, tule perch, Sacramento sucker, and Sacramento splittail have returned to the creek. Green herons (we watched one of these hunting on the beaver dam), snowy egrets, great blue herons, belted kingfishers , and black crowned night herons have returned to hunt the fish. And recently, river otters also showed up to eat the fish! (We saw their paw prints on the river bank.) Muskrats too came, and then mink to eat the muskrats.

This photo is of one of the Martinez beavers and their dam.

Did we once have beaver in Santa Cruz? An Ohlone word for beaver was collected at the Santa Cruz mission, though this may simply mean that the locals traded for beaver. Beaver were practically eradicated in California during the 19th century “Fur Rush”, so it’s hard to say. Currently the nearest beavers live in the Lexington Reservoir and Pescadero Creek. The Water Institute at Occidental Arts and Ecology Center has started an exciting project working with agriculturalists to restore beaver to California watersheds-go to www.oaecwater.org/beaver for more. Also see www.martinezbeavers.org. And stay tuned for more tales of species return!