Thirty Years of Dedication and Cooperation

The River & Road Clean Up was the inspiration of Al Haynes, first Watershed Analyst for the San Lorenzo Valley Water District. Concerned about the ever-increasing amounts of litter and trash starting at roadsides and working their way into the waterways, Al wrote a grant for the Water District to establish the first River & Road Clean Up in October, 1986. He reached out to the Nancy Macy of the Valley Women’s Club to help him enlist volunteers and manage publicity. After the first year, the VWC took over coordination and financing the project, with the continuing support of Al and the Water District. (Al was also known for his role in helping with the San Lorenzo River Watershed Management Plan, first drafted in 1979.)

After thirty years of cooperation and support, the Water District still provides a dump truck and two employees to haul materials from Boulder Creek and Ben Lomond, and, as Al had arranged, the County of Santa Cruz also continues to provide a dump truck and driver to haul the Felton materials, along with free trash disposal at the Transfer Station. The first year, and for over a decade after, there was a gathering of participants at Highlands Park for a Bar-B-Que with beans, and dessert, celebration, featuring a speech by our 5th District Supervisor and prizes for those who brought in the most trash, the most unusual items, the most appliances or sports equipment, and other fun categories. The prizes were donated by local businesses. That tradition stopped when busy families could no longer devote the entire day to the event, so snacks and beverages have been provided at the Sign-in/Weigh-in tables instead. 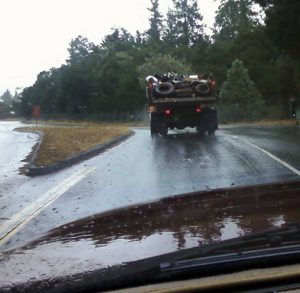 Originally the Sign-in/Weigh-in stations were at the original location for the SLV Redemption/Recycling Center in Boulder Creek (in Johnnie’s Market side parking lot), in Ben Lomond at the SLVRR Center in the (formerly) empty lot by the Tyrolean Inn, and in the parking lot of Vista Foods (now the Felton Rite Aid) on Hwy 9, just down the street from the Felton SLVRR Center on Gushee St at Hihn St.

The Valley Women’s Club has been partnering with Save Our Shores for the past eight years, moving the Clean Up to September to coincide with the SOS Beach Clean Up. To give credit where credit is due, from 2007 through 2014, another local organization, SLV CORE staffed the very busy mornings for SOS at the Felton Covered Bridge site, with the VWC handling the afternoons, and the other two sites all day. In 2015 and since, the VWC again handled all three sites all day.

At the 25th year, the Clean-up was officially named The Al Haynes Memorial Annual River & Road Clean-Up, honoring Al who had died the previous year, and whose vision was still being fulfilled by dedicated volunteers each year. The Bar-B-Q was brought back for that year in his honor, with prizes and all, and with a huge art-construction contest (making art from trash) and quarter-century celebration.

Five years later, the VWC celebrated thirty years of commitment and community cooperation, motivating a total of 146 volunteers, ranging in age from pre-school to 90-plus, to come help with the Clean-up, bringing in over 5000 pounds of trash and recyclables. The support of the SLV Water District’s dump-truck team, and the County’s driver, cannot be understated – making the task do-able.

The Boulder Creek Sign-in/Weigh-in Station had moved with the SLVRR Center (now located behind the Village Wash & Dry), while the Ben Lomond Station moved out on the sidewalk in front of the lot by the Tyrolean Inn on Hwy 9, and the Felton Station moved to the beautiful Covered Bridge Park when Save Our Shores (and SLV CORE for seven years) brought the morning’s Beach Clean-Up up-River. That thirtieth year brought in over 4200 pounds of trash, plus over 1000 pounds of recyclable materials, that otherwise would have contaminated the River and its wildlife on the way to the Bay. A 30th anniversary celebration also took place at the Covered Bridge Park, with fresh popcorn (thanks to the Felton Fire popcorn machine) and relay races.

Please note that the Lompico Community Center has held its annual Creek Clean-up for even longer that the VWC, and has also worked in conjunction with Save Our Shores starting in 2007. The County provides trash hauling for that effort as well. So the spirit of watershed protection is alive and well in the San Lorenzo River Watershed!

The annual effort brought out an average of 120 volunteers who hauled in two to five tons of materials each year. For many families the Clean-Up became an annual family event. Then, years later, those children had grown and become teachers and parents who then brought their students and children to help carry on the tradition. (Photos)

We are dedicated to working with the community, other non-profits, and government agencies to continue the effort to educate the public on the fragility of the San Lorenzo River Watershed, and to take action in protecting and restoring it.