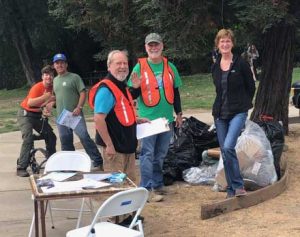 The 35th Annual SLV River & Road Clean Up volunteers enjoyed a cool day for their daunting task of removing trash and recyclables from along the San Lorenzo River and its creeks, as well as nearby roads. Over seventy volunteers, ranging in age from 1st grade to over 80 years, ventured out to remove trash before any hoped-for rains might come to wash it down the waterways into the Bay. The Annual Cleanup event has been organized by The Valley Women’s Club since 1986, partnering with the support of the Santa Cruz County and the SLV Water District since its inception, and with Save Our Shores for the past ten years. This year, the Clean Up was only three hours, but 1,000 pounds of trash –– including large amounts of plastic — and recyclables were removed from the riparian area and neighboring roads.

In Felton, early arriver Debbie Wingo proudly brought in huge bags of material that she and her daughter picked and brought to the Covered Bridge Park registration/weigh-in site staffed by Brackin Andrews, Roger Wapner, and Jerry DeLany. Father-son team, Greg and Caleb Jones went deep into the water behind the park to pull out all sorts of trash and items, including a unique seat with pedals for use by disabled persons. A large contingent of Old Orchard School (from Campbell) students and parents came all the way to Felton to help as well!

In Ben Lomond, SLV Rotary member Cindy Sekkel and her friends Lonette Cutter and Ed Titus braved the steep embankment to pull out a sizeable broken mirror. They also filled several bags with trash, bringing them to site volunteers Judi Sherman and Jasmine Paredes to weigh in. Other volunteers helped add to the large pile of materials from neighboring areas.

Each resident of the San Lorenzo valley can help make every day River & Road Clean Up Day by removing the trash from along their road frontage or from the pull-outs along Highway 9 and other major roads.

In Boulder Creek, there were several champions at work, including Ida Josie Hubert, her daughter, and her folks Laurie and Dan Hennig, who tackled piles of trash along Bear Creek Rd. Joining in was Supervisor Bruce McPherson, who has helped at the Clean Up for many years. Helping them weigh in their materials were Michele Estrin-Gelblum and Mike Holton, who were impressed by the amount of materials people on foot were able to bring in, including a 9’x12′ rug and a 10′ iron pipe.

“Each resident of the San Lorenzo Valley can help make every day River & Road Clean Up Day by removing the trash from along their road frontage or from the pull-outs along Highway 9 and other major roads. Don’t wait for a year to help protect your waterways and their wildlife from the impacts of cigarette butts, plastics, and other debris’ contamination,” Environmental Committee Chair Nancy Macy said. “Everyone should try to protect the River year-round.”