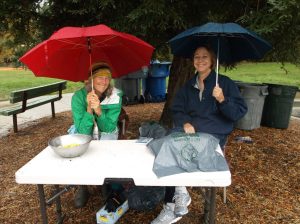 Volunteers register at the Felton Covered Bridge on a cool (but still dry) morning.

Despite a long-awaited rain, the 27th Annual River & Road Clean Up was a big success this year. Total numbers of volunteers as well as the volume of trash and recycling collected surpassed the totals from  the previous year (see chart, below). The rain held off just long enough that over 150 volunteers were able to pull over 4 tons of debris from the San Lorenzo River and nearby roads.

As has been the case for several years, The River & Road Clean Up took place the same day as the big Save Our Shores coastal cleanup. The Santa Cruz Sentinel reported that the volumes of trash collected inland was up while the volumes collected on the beaches were down.

“We know that a lot of the material that ends up on the beaches comes from inland. By cleaning up the San Lorenzo River and nearby roads we’re able to make things healthier in the SLV while reducing debris that ultimately makes it’s way into the Monterey Bay” said David Wright, Director of SLV Redemption & Recycling.

SLV CORE, led by Beth Hollenbeck and her young team, felt good that so many volunteers came in spite of the weather. Their main areas of focus were Covered Bridge Park, Zayante Creek, along the San Lorenzo River flowing near ProBuild, beneath the Graham Hill bridge and the Covered Bridge, and far down Hwy 9.  5th District Supervisor Bruce McPherson joined along with other volunteers, and helped pull out hundreds of lbs of mattresses, tarps, bottles and a variety of garbage that would have floated down the river in our next storm. Student volunteers from San Lorenzo Valley and Scotts Valley schools also worked hard picking up hundreds of cigarette butts and other trash.

For the first time, volunteers joined 17 volunteers from Daybreak Camp to focus on the River by the Felton Horse Meadow.  Rich Burdick, Co-Director of the Camp, provided dump boxes and cleared access to that part of the River, and to areas on the meadow badly impacted by years of trash. Daybreak Camp, since purchasing the Meadow (thus protecting it from housing developments) has been working to clean it up, and reached out to the Clean-up, finally completing trash removal from along the River north of Graham Hill Rd. for the first time.

Dustin Cochran, a 5-year Clean Up veteran who has always focused on Bear Creek Rd., pulled out the most trash and recycling into the Boulder Creek site, topping the scales at almost 300 lbs His haul included mattresses and many huge bags of junk and filled his pick-up truck to overflowing.  Several teams of Girl Scouts, with their parents, concentrated their efforts around Junction Park and dragged in many bags filled with wet, dirty trash.

In Ben Lomond several family teams worked in spite of the wet weather. Brook Williams and his Dad, Jesse, kept working for many hours, returning again and again with loads of trash, including almost 2000 cigarette butts.