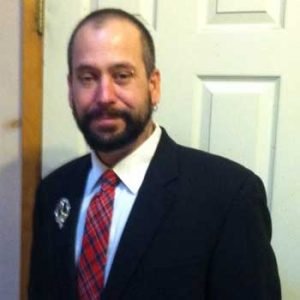 With the resignation of Director Dave Wright, who has become a partner in a company that does strategic planning, the VWC worked fast to find a new, part-time Director, to fill Dave’s challenging job. Income shortfalls necessitated significant belt-tightening, including cutting administrative costs, so the Director’s position was revamped as part-time.

An ad hoc Hiring Committee was established and the job was advertised widely. An extraordinary group of applicants provided letters and resumes, making the selection process both difficult and rewarding. After interviews, the choice was narrowed and the decision made in late January by the Board. SLVRR’s own Ben Lomond Site Manager, Matt Harris, was chosen to undertake the challenges of directing the Centers.

Matt will continue as Site Manager and took on the part-time role of Interim Director on February 2, 2015.Matt has been site manager at the VWC’s recycling center at the Ben Lomond Transfer Station for the past 17 years where he has excelled at team and program development and maintaining a healthy, safe and productive work environment.

“I am excited and very ready to step up to this new challenge in our company as Interim Director” Harris said. “I am quite honored to have this opportunity to take the lead in our recycling efforts as it contributes to the VWC’s stewardship in protecting the SLV watershed.” Matt brings to the position a wealth of experience and knowledge of the San Lorenzo Valley—its people, resources, struggles and accomplishments. As a 1988 SLV High School graduate he has truly embraced their mission “to be self-directed, an active participant in society who recognizes diversity as a strength and who meets the challenges and opportunities of a changing world.” Along the way he has gained certification as a “train the trainer forklift instructor” and as an HVAC technician in Freon reclamation, and has just recently initiated the roll out of the VWC’s highly sought after Styrofoam Densifier Recycling Program.

Happily, Danya Leopold, Manager of the Centers for twenty-five years (first with founding Director Nancy Macy, and then with Dave Wright),  will be there to help with the transition and continue to provide vital operations experience for the Centers. Matt and Danya will lead the team of employees who operate the Centers for the VWC, and assure that all the tasks related to the County contract, the State’s CRV procedures, safety standards, and service to the public, will be completed in a professional manner.

Many challenges face the new team and Matt has many ideas for making improvements. Matt is leading the testing and licensing of the new styrofoam densifyer. Once it is ready the VWC will be the first and only recycler to accept, densify and sell styrofoam blocks in this region. The foam will then be made into picture frames and other consumer products. The machine has arrived, with its generator not far behind. (help this succeed and help us name the densifier! See article below.)

The system will be “beta-tested” to be sure that every aspect of its operation is understood and functioning well, that EPA pollution standards are met, and that volumes are as anticipated. Once it is functioning, and actual costs involved are understood (permits, time, transportation and labor), the public will be notified so that folks may drop off their styrofoam blocks. The entire set-up will be installed on a trailer so that it may be driven to the other landfills and recycling operations in the region, all of which are eager to begin recycling styrofoam rather than burying it.

You can meet Matt at our Annual Meeting on Sunday, March 22, 2015 at Highlands Park Senior Center.

And remember, the Centers need your recyclables to maintain operations. Bring all your materials to us!!! Check out our Recycling Page or details.