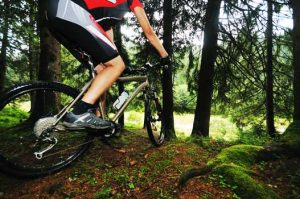 By Nancy Macy, for the Environmental Committee

The DRAFT Environmental Impact Report (DEIR) has been delayed again on the proposal by Mt. Hermon Christian Conference Center to construct an enormous Bike Velocity Park on the 14-plus acres between Felton Faire Shopping Center (where the Safeway is), on Graham Hill Rd. More individuals have been speaking out against the size and scope of the proposal, as they learn about it. The EIR will define problems with the proposal and examine how the plan would deal with them (see article from Fall e-Newsletter for details of the EIR Requirements).

Once released, there will be a 45-day period where people may comment on the Draft before the Final EIR (FEIR) is completed and published. Much of the EIR will look at information gathered in the past from previous plans for the property (Senior/Affordable Housing), and use the studies done for that in the current Report. Other sections will necessitate new testing and evaluation, as defined in the Request for Proposal for the EIR that is guiding the company that was contracted by the County to complete it

The VWC’s Environmental Committee has an active Subcommittee on the Felton Meadow Project (a skilled group of over twenty people) investigating the issues. They are putting together an extensive amount of information relating to the proposed plan and its environmental and social impacts. In addition, they are researching other bike parks and their impacts – finding topics such as their financial stability, economic benefits and liabilities, insurance liability, injuries, environmental impacts, and more. In the coming weeks the research and related information will be made available on the VWC website for those who would like to peruse the issues.

In January, Mt. Hermon presented a beautifully prepared Town Hall program at Felton Community Hall, to share their vision and enlist support for the project. Their presentation covered many of the concerns voiced in letters and comments that led to the Supervisors’ demand for a full EIR. Huge, beautifully designed posters and displays, and a well crafted informational power point presentation carried their message. Many supporters were there, including some young bicyclists – primarily teen and pre-teen boys. It is easy to see how attractive the idea is.

Many skeptical people were also there, asking questions and making observations. One of the youngsters asked at two different times about how much it will cost to use the flow trails and pump tracks. He was given assurances that locals would have the opportunity to purchase a year-pass at a discount, but there were no specifics about the fees for bike camp or for independent use of the bike tracks, whether for one day or for the touted discounted year pass. There is real concern about whether local children and teens will be able to afford more than occasional use of the facilities.

The design is remarkable. Along with the steep dirt-bike flow trails accessed by an amazing “magic carpet” tow system, like a ski slope, there are two smaller pump tracks for younger children to learn how to navigate bumps and jumps. Above the bike flow-track system there is an observation platform; below is a high rope-aerial-adventure structure, a water-play splash park, a couple playfields and plans for archery and other games among the oaks. In addition, a large retail concession building (including bike rental & washing facilities, food, beverages, souvenirs and a lounge), a large classroom/daycare building with toilet and shower facilities, and several other smaller infrastructure buildings will be constructed. Helping with the flow from Mt. Hermon’s Redwood Camps and the main conference center, a pedestrian bridge across Zayante Rd. will be constructed. Also featured is a community garden, a large septic system, and a large parking lot for cars and buses.

Please note that the Mt. Hermon presenters pointed out that the other activity facilities (rope course, splash park, playfields, target games) will be separated from the bike areas and not be available for public community use. The community gardens may have plots available for people outside of Mt. Hermon.

The entire plan covers 12-plus acres below Mt. Hermon Road, along the Graham Hill entrance to Felton. It will cost millions to build and take at least six years to build; it is logical to assume that income from local usage will not be adequate to meet the costs of construction, maintenance and staffing, and the impacts of construction will continue for up to a decade.

Mt. Hermon’s goals are, necessarily and understandably, to meet its own needs, which go far beyond providing a bike park for locals to enjoy. Nate Pfefferkorn, Mt. Hermon’s Director of Adventure and Recreation, gives some insight into that when he states in his first blog on the project, “When Mount Hermon miraculously acquired the property at the bottom of Conference Drive, adjacent to Redwood Camp, known as Felton Meadow, the possibilities felt endless on what could be done and what the ministry impact could look like. Prayer and research allowed several ideas to float to the top, but there was one that resonated deeply – an adventure park that would include a mountain bike park.

For the last several years we have had front row seats to the ministry impact of the Redwood Canopy Tours and how guests we never thought we would encounter are coming and being introduced to Mount Hermon, the beauty of God’s Creation and the love of Jesus. The Felton Meadow property gives Mount Hermon an opportunity to reach out and serve another yet another unique audience. Mount Hermon’s location places us in the middle a very unique demographic in this area that is hungry for a mountain bike type of activity.”  [Blog] 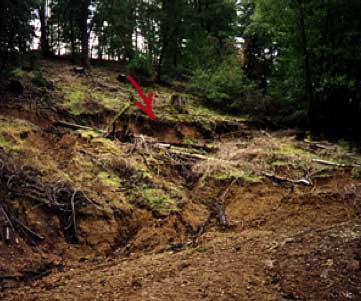 Example of erosion after trees were cut.

We feel it is crucial to ask, IS it possible to “mitigate” concerns over loss of meadow viewshed, expanded water use (not just from the project itself but from ever-increasing visitation at the Conference Center), critical infrastructure maintenance (especially of the complex drainage system), increased traffic in an area already designated as “D minus,” loss of habitat for wildlife, and the potential for erosion and flooding that severe storms may well cause?

These are among the myriad concerns that are met with assurances that it’s all taken care of in the plans. As if over a thousand new car trips a day will have no impact. Or, that there was not an already existing dire need for the water conservation steps taken to “compensate” for the Project’s added use. (Remember the severely depleted aquifer and the drought; those conservation steps were already overdue.) As if cutting the trees after the birds finish nesting won’t destroy their future nesting sites. Is the plan to prevent erosion still OK if erosion occurs is when the drainage plan designed for a ten or twenty or thirty-year storm fails in a fifty-year storm? And, is the increased overflow of water OK, in that same storm, when it floods homes in Felton Grove? When is a recreational opportunity of limited benefit to the community at large of greater value than the bucolic and rural feel that is the very essence of the Felton township? Why speak of the beauty of God’s creation when it is being replaced by a man-made “adventure park”?

Mt. Hermon’s power-point presentation calls it the “Felton Meadow Project,” but there is no more meadow, no four bioregions, no open-space, no wildlife corridor and no public access without paying a fee.

Many questions remain, and will remain of the appropriateness of the bike velocity park at that site, who it will benefit, and what the community’s costs and losses will be long after its built. Please return to the VWC website in the coming weeks, to see the information being researched to better understand this issue. 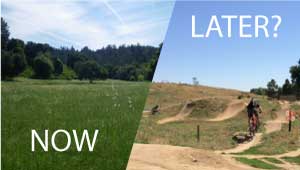