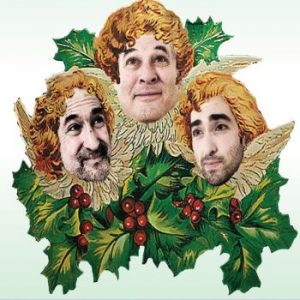 By Samuel and Bella Spewack

based on La Cuisine Des Anges by Albert Husson

The holiday offering for Mountain Community Theater’s 2014 Season is the quirky warm-hearted comedy My Three Angels by Samuel and Bella Spewack and includes VWC Board Member Peter Gelblum.

The story is set at the turn of the 20th century in tropical French Guiana, where it’s Christmas Eve and 105 degrees. Three convicts – two murderers and a thief – on work release from Devil’s Island prison are working as roofers above a shop owned by the Ducotel family. They overhear the family below and learn that a crisis is about to descend on them. The convicts decide to put their collective criminal knowledge to good use and descend themselves into the shop. When trouble arrives from France in the form of a sinister cousin who plans to close the shop and his cold-hearted nephew, who is jilting the family’s daughter, the convicts intervene and mayhem ensues. Matters are set aright and the benevolent scoundrels prove themselves to be angels to the grateful family. Oh, and there’s a pet snake named Adolphe.

Two films are based on the play. The 1955 movie “We’re No Angels” starred Humphrey Bogart, Aldo Ray and Peter Ustinov. It is one of the rare comedies that Bogart appeared in. In 1989, the film was remade with Robert De Niro, Sean Penn and Demi Moore.