The Community Connection Committee sponsors and participates in selected community events and liaises with other SLV organizations and government officials. 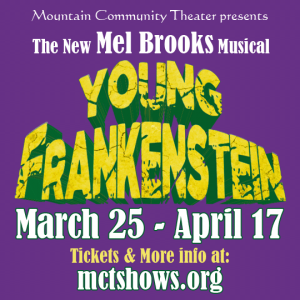 Community Night is Thursday, March 31 at 8:00 p.m. when all tickets are 2-for-$22. (Note that there is no matinee on Sunday, March 27.) General tickets are $25; Senior and Student tickets are $20.00. The show is rated PG-13; some content may not be appropriate for young children. Tickets go on sale February 26. Click here for tickets and a fun teaser video!

Young Frankenstein is based on Mel Brooks’ 1974 comedy film of the same name. The musical opened on Broadway on November 8, 2007 and ran for 484 performances. It won the Outer Critics Circle Award for Best Musical in 2008, and was nominated for three Tony Awards!

The story follows Frederick Frankenstein (pronounced “Fronkensteen”), grandson of the infamous Victor von Frankenstein, creator of The Monster. Frederick travels to Transylvania to deal with his grandfather’s estate, meeting along the way Igor (pronounced “Eye-gore”), the grandson of Victor’s henchman, the lovely Inga (a yodeling laboratory assistant), and the mysterious Frau Blücher. Frederick is lured into creating another Monster, who ends up falling in love with Frederick’s fiancée Elizabeth. Musical numbers include “Please Don’t Touch Me,” “Transylvania Mania, “He Vas My Boyfriend,” “Surprise,” and, of course, “Puttin’ on the Ritz.”

This will be Ms. Troxell’s third time directing for MCT. She is the Resident Director for Little Peoples’ Repertory Theatre (LPRT), and has directed several times for Actors’ Theater 8 Tens at 8 in Santa Cruz.

This is Ms. James-Heskett’s second time working with MCT, and she has worked with LPRT and SLH High as well.

Mountain Community Theater (MCT), the longest-running community theater in Santa Cruz County, started in 1982 by a collective of actors. MCT is a member-run non-profit organization that relies on support from its performances, season subscribers, and royalties from its own company-created script, Miracle on 34th Street, the Play. For more about MCT and the saga of its amazing “Miracle,” click here.