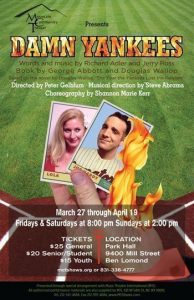 “Damn Yankees” tells the story of Joe Boyd, a middle-aged married man who loves his perpetually losing Washington Senators as much as he hates the perpetually winning New York Yankees. When the Devil appears in the form of the smooth Mr. Applegate, Joe jumps at the chance to trade his soul to become the greatest baseball player of all time and carry his Senators to the pennant. As the Senators go on an historic winning streak and near first place, Joe finally realizes how much he gave up when he walked away from his wife’s love and their workaday life. Will he go back, or will he succumb to the temptations of fame, glory, and the charms of Applegate’s assistant, the luscious Lola?