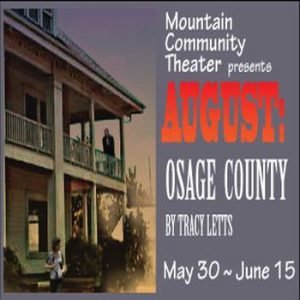 Directed by Peter Gelblum; May 30-June 15

Mountain Community Theater is proud to present the area premiere of Tracy Letts’ August: Osage County, one of the most acclaimed plays of the last decade, winner of the 2008 Tony Award for Best Play and the Pulitzer Prize for Drama, and an enormous success on Broadway. Tracy Letts’ sprawling saga about three generations of an Oklahoma family has drawn comparisons to the work of American dramatists Eugene O’Neill, Sam Shepard, and Tennessee Williams. In addition, the recent movie adaption garnered Academy Award nominations for both Meryl Streep and Julia Roberts.

The fiercely funny and bitingly sad story, which unfolds over the course of several weeks, tells the story of the Westons, a large extended clan that comes together at their rural Oklahoma homestead when the alcoholic patriarch disappears. Forced to confront unspoken truths and astonishing secrets, the family must also contend with Violet, the acid-tongued, pill-popping mother at the center of this storm. From the very beginning, this dark comedy aggressively exposes the dysfunction of their Midwestern family. The performance contains adult language and subject matter that is not suitable for young children.

August: Osage County opens at Ben Lomond’s Park Hall on Friday, May 30, and continues through Sunday, June 15. Thursday, Friday and Saturday performances are at 7:30 p.m. Sunday matinees are at 2:00 p.m (no Sunday matinee on opening weekend). General Admission tickets are $20.00. Students and Seniors are $17.00. There will be a champagne reception on opening night. The Thursday performance on June 5 is a special “2 for 1” at $20.00. There will also be a special talk back with the cast after the Sunday matinee on June 8.