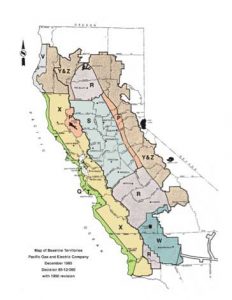 Thanks to the remarkable research and insights of Felton resident Paul Norcutt, the Environmental Committee is spearheading a campaign to motivate the PUC to have PG&E change the BASELINE rating for this area, in order to make electric heat more affordable. This, in turn, would allow more residents (now dependent on wood stoves as the least costly source of heat locally) to use electricity as their primary source and wood as their back-up. A higher baseline rate results in lower electric and gas bills.

Paul, deeply concerned about the severity of air pollution in the SLV (caused by excessive particulates from wood burning stoves during winter months) reasoned that an affordable alternative source of heat for those using stoves could help reduce the pollution. (Efforts by the Monterey Bay Unified Air Pollution Control District to subsidize the replacement of wood stoves for other sources have been successful, and subsidizing dry firewood has helped, but not done enough.)

Paul began to research PG&E, studying its policies, processes and procedures. He found that the area designation for locations above 1500’ in Santa Cruz, Area Q, was established because of colder temperatures. He found that the Sunset climate area 7 for the San Lorenzo Valley is the same as PG&E’s area designation P, which was the same as in at least two other PG&E areas. Those areas were given a larger baseline allocation for their tiers because of their cold temperatures, making costs significantly lower. With further investigation is became evident that the San Lorenzo Valley was given an incorrect area designation, effectively locking our electricity and natural gas pricing to almost double the surrounding areas. Check out the Area map to see that we are included in Area T which has a much lower baseline allocation. This is blatantly unfair, as clearly stated in PG&E’s own documentation. This should increase the possibility of getting the change made.

We are reaching out to the community to support the effort to lobby the PUC to make the change to help reduce dangerous particulate air pollution. We have the support of the Monterey Bay Area Air Pollution Control District, and Supervisor McPherson’s office has offered help in getting information through the County’s PG&E liaison. Next we reach out to local business associations, businesses, the SLV School District, the SLV Water District, and affected individuals to make the change. Let us know if you want to sign on to the petition.