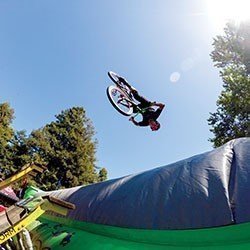 When a well-known and highly respected organization like Mount Hermon proposes a large development that offers a thrilling recreational opportunity to young people, it is difficult to question or challenge its construction as proposed. The Mount Hermon Youth Recreation Project, planned for over 12 acres of the “Felton Meadow” property on Graham Hill Rd. next to the Felton Fair Shopping Center, is just such a proposal, with many thousands of dollars already spent in design, planning and PR.

At first the County Planning Department appeared willing to allow it to slide through the planning process with a “mitigated declaration” — basically saying there is nothing in the plan that cannot be constructed to produce little or no negative impact on the environment or on the community — an obvious impossibility when over twelve acres of steeply sloping trees and meadow are converted to an imposing Velocity Bike Park, with two pump tracks, a dirt jump area, an aerial jump bag, a cross-country skills area, and several downhill flow trails, serviced by the first magic carpet lift utilized by a park in the United States — along with a large education building, a bathroom building with toilets and showers, a water-play area, a playing field, an extensive septic system, a day-care center, a concessions shop, extensive lighting for night use, an area for fifty “community garden” plots, parking lots, climbing towers, and other recreational areas.

One look at the massive impacts of the design was enough to cause the Valley Women’s Club, the SLV Water District, Federal agency NIMFS/NOAA, and many neighbors, to protest that a full Environmental Impact Report (EIR) must be undertaken. A thorough review of the plans led 5th District Planning Commissioner, Renee Shepherd, to request an EIR. Once alerted, the Board of Supervisors agreed and a “Request for Proposals” (RFP) to hire a company to conduct the Environmental Impact Report was approved in early July. Once hired, the company will start the process in October.

Some things cannot be mitigated; as the meadow disappears little wildlife will remain – already reduced by the new perimeter fencing. Even with careful design there is potential for flooding onto Graham Hill Rd. and beyond, when severe storms overwhelm the planned run-off retention swale. Can septic failures like those Felton Fair experienced be avoided, with dozens of toilet flushes and showers each day? Already depleted, water usage will further impact the aquifer, as Mt. Hermon’s on-going expansion has already done. Special soils brought in to pack the bike tracks will loosen and erode and need careful maintenance potentially helping to overwhelm protections and impact Zayante Creek and the San Lorenzo River, during those severe storms. What about noise, and 1300 more vehicle trips daily?

Skilled individuals have evaluated the plan and found that, in spite of the fun it can offer to lucky bike-campers and other uses, it is an enormous project that has a permanent, untenable impact on the land, the watershed and wildlife, stressing the aquifer, and threatening nearby waterways — and on the community (traffic, night-time light, noise, impacted view shed, potential water concentration/flooding across Graham Hill Rd. in severe storms and more). Its size and scope is demonstrably unhealthy both for the environment, at the critical junction of Zayante Creek and the San Lorenzo River (identified as high priority for Coho Salmon and Steelhead Trout restoration, and will have an enormous visual impact along the entrance to Felton and the San Lorenzo Valley.

Other concerns to be considered are how much the local community will be able to use the park, and the cost to do so. Will is be something that local youth will be able to afford more than for an occasional treat? Will it stimulate more irresponsible mountain bike usage in other areas of the mountains, damaging hillsides and sensitive habitat — already an enormous issue in the Sand Hills, Henry Cowell Redwoods State Park, and in many privately owned areas.

With such questions about the cost and access to the bike tracks, hopefully more information will come out about these concerns in the EIR and through further public meetings.

In the meantime Mt. Hermon explained to VWC and community representatives that the bike areas will operate as a “Camp” on weekdays and will emphasize the importance of high-quality, skilled personal instruction to provide real skills to the young users. In their website blog by Nate Pfefferkorn, the Mt. Hermon staffer who helped design the project, this thoughtful plan is elucidated upon, and he also says the bike instructors will be Christian, and points out that the expressed purpose of the bike track is to bring a wider audience to Jesus, as with the zip lines and other recreational offerings at the Conference Center.  http://www.mounthermon.org/blog/general/2014/10/introducing-velocity-bike-parks/.

Safety is a significant issue at bike parks, with the possibility of severe injuries a risk of the sport. Mt. Hermon has thoughtful plans in place and will have medical staff on duty. The plans emphasize the importance of careful instruction, high-tech safety equipment, and supervised practice. Ironically, when researching similar bike parks online, the costs for such services, and impacts on usage such as weather and seasons, have contributed to financial difficulties — even when located in high population areas — making one wonder how important enticing users from out of the area will become in order to help cover expenses.

In spite of well-meaning efforts to mitigate the impacts through relatively minor adjustments to the plan – such as shortening light poles and removing the planned paint-ball area – along with heart-felt personal outreach to the VWC and other organizations, Mount Hermon has apparently failed to recognize the value and potential of their environs by seeking to build an enormous “adventure park” in order to appeal to a new demographic group to expand their ministry.

By planning to use Leeds design criteria for the various buildings, Mt. Herman’s leadership feels there is thus no damaging issue of merit in constructing them. In seeking “mitigations” like their touted ability to offset the new park’s water use by conserving water in the main Conference Center, they fail to recognize that such conservation is already direly needed due to severe drought conditions and an already rapidly dwindling aquifer. So, their reduced use is of little consequence in mitigating additional water use. Their comments confirm that they see the bike park as “natural” and “open space,” — as if this massive construction project is no different than meadow and woodlands.

By creating a massive and unique bike park, Mt. Hermon’s plans may meet the letter of the law while ignoring its intent, and will have created an exciting project, while incapable of seeing that it is a terribly inappropriate and destructive plan, in the wrong place, with permanent and problematic impacts.

(Note: Mount Hermon is a private religious institution, claiming 502-c-3 non-profit status. It is not required to file the regular 501-c-3s’ 990 tax forms since it is described as an independent “Church,” according to Tax Exempt World. It has Total Assets of over $49.6 million, and Total Liabilities of over $8.4 million, as of December, 2014, according to the Evangelical Council for Financial Accountability, of which Mt. Hermon is a founding member. They have offered camping, retreats, workshops, music — for all ages — since the early 1900’s. Their camping/conference center is a beautiful, quality resort experience for their constituency and has expanded to increase adventure experiences like the zip-line tours. Their staff is recognized as dedicated and caring, and works hard to live up to its mission and goals. http://www.mounthermon.org)