Hammer-Marcum Award Celebration a Highlight of the Year 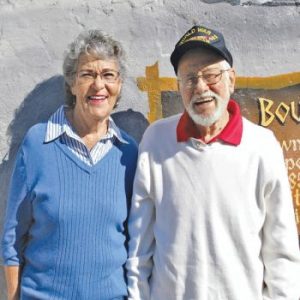 The 2013 Hammer-Marcum Award celebration brought 90 people together to honor Tai Stills, Jeri Green Oneto, and Bruce Oneto for their many years of dedication to an amazing array of organizations and causes in wide ranging social and environmental areas. The event was filled with music and laughter, delicious desserts and champagne toasts, flowers and words of commendation and thanks.

After a warm welcome by VWC President, Lynn McKibbin, talented jazz pianist Ben Anjo entertained the crowd, as they enjoyed the array of beautiful and delicious desserts, handmade and donated to the event by Jeri and Bruce. Board Member Nancy Macy gave the history of the Hammer-Marcum Award, noting that it had originally been called the “SLV Volunteer Award” but it had been secretly planned to name it after the first honorees, Annette Marcum and Mary Hammer – and that 45 people had received the award since 1989.

Then, as Board Member Sanda Spiegel welcomed first Tai, and then Jeri & Bruce, up to the podium, and reviewed the remarkable years of devotion each has given to our community, those listening found themselves moved and astonished by the three people lauded as “ideal to be honored in the names of Annette and Mary.”

Both Annette and Mary were there, giving beautiful flower bouquets to the honorees and providing personal thanks for each recipient’s contributions. Presenting a framed Proclamation from the Board of Supervisors to each honoree, our 5th District Supervisor Bruce McPherson noted that this year’s recipients had impacted the entire County, not just the San Lorenzo Valley. State Assembly Member Mark Stone, presenting a Joint Resolution from the Assembly and the State Senate, called their efforts “ubiquitous” because they seemed to be involved everywhere. The large Joint Resolution was handed to the honorees by Gabrielle Robinson, a member of State Senator Bill Monning’s staff. Mark also presented honors from US Congress Member, Anna Eshoo, putting their names into the Congressional Record.

A final toast, given by Amanda Robinson, noted that “you bring energy and spirit to all that you do.”