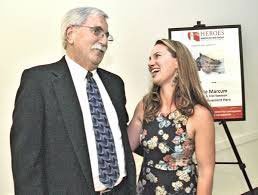 On Sunday, October 25th, at the Highlands Park Senior Center, The Valley Women’s Club announced the recipients of the 2015 Hammer-Marcum Award, Jim Rapoza and Hallie Greene. Both honorees have worked to underscore the interests and concerns that epitomize the San Lorenzo Valley community. Hallie represents the neighbors-helping-neighbors ideal, the importance of involvement in the local community, promoting local businesses, and supporting non-profit organizations. Jim champions the vital importance of individuals providing public service to assure good governance, expanding opportunities for children and at-risk youth through education, and promoting stewardship of our watershed.

The Valley Women’s Club created the “Volunteer Recognition Award” in 1987 specifically to honor Mary Hammer and Annette Marcum, so it then became “The Hammer-Marcum Award.” Annette and Mary embodied the ideal of long-term volunteer commitment, having given thousands of hours to improve the quality of life of local residents, and which they continued to do for over a quarter century (Annette died in 2014, and Mary continues to serve). Jim and Hallie join 46 others who have been honored since the Award was established.

Our government representatives joined the celebration in their honor: State Senator, Bill Monning, State Assembly member, Mark Stone, and our 5th District Supervisor, Bruce McPherson, were there in person to present tributes to the honorees. Congress Member, Anna Eshoo, sent her representative to give special recognition.

Congratulation to both Hallie and Jim. Your community is so proud of you!