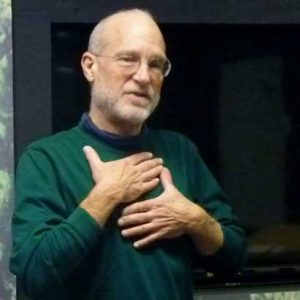 The January Environmental Committee Meeting took place in the Video Room in the Nature Center, with virtually all seats taken to hear from former Santa Cruz Mayor, Bruce Van Allen, leader of the successful DeSal Alternatives movement to identify improved ways to provide water to Santa Cruz City and the Soquel area, without depending on a Desalinization Plant that would consume massive amounts of energy. Crucial to the plan was the need to reduce the amount of water taken from the San Lorenzo River to improve conditions for endangered and threatened salmonids (Coho Salmon and Steelhead Trout).
Bruce described the process that the City went through when it tried to gain approval for a DeSal plant but met massive resistance that ended up in a referendum that stopped the plan and established a commission to do in-depth research to find alternatives to the current water sources, and make recommendations for implementing them. 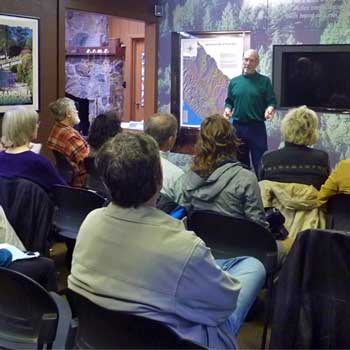 The 14 member Water Supply Advisory Committee (WSAC) process resulted in a major plan establishing both Conservation and Groundwater Storage: In Lieu Water Exchanges and Aquifer Storage and Recovery (ASR) as the means to realize improved supply. Using recycled water and DeSal would only be developed if the plan proved insufficient.

The Conservation program will go beyond current efforts and look at new programs, such as increased rebates and better management of peak season demand. The goal of additional programs is to reduce demand even further by 200 to 250 million gallons per year!

The Groundwater Storage program is based on the fact that there is more rainfall than needed to meet customer needs, so, by using In-Lieu Water Exchanges, the City would deliver available winter flows to Soquel Creek Water District (SqCWD) and/or Scotts Valley Water District (SVWD) customers, thus allowing reduced pumping by them from our regional aquifers and enabling the aquifer to passively rest and recharge. Using ASR, available winter flows would be injected into aquifers through new and existing wells owned by the SCWD, SVWD and/or SqCWD, thereby actively recharging aquifers. A portion of the water delivered using In-Lieu or ASR would be effectively banked in the aquifers to be extracted and returned to SCWD when needed in future dry years.

The process has already started, with interties being installed. There is real hope that there will be improved River flow in the summer, even during drought.

The SLV owes Bruce Van Allen, and the other dedicated members of DeSal Alternatives, an enormous thank-you. Their efforts, coupled with the effective leadership of Water Director, Rosemary Menard, may improve things more than hoped for in the recent past.