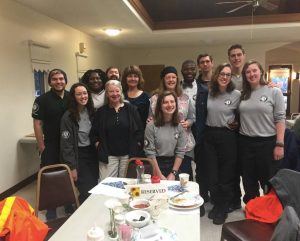 An AmeriCorps National Civilian Community Corps (NCCC) team, Blue Six, has been serving in the San Lorenzo Valley since Jan. 12; their weeks of work will end after being honored at the VWC Annual Meeting on March 13th, and they will head off to their next assignment in Sequoia National Park. The eight members of Blue Six has been helping protect and restore the Watershed by removing invasive plant species in Highlands County Park in Ben Lomond, restoring local landscapes at Mountain Arts Center, Mountain Community Resources and Junction Park in Boulder Creek. They have also worked on various renovations in and around the area such as building structures for Garrahan Park, restoring Snowy Plover habitat at Scott Creek Beach, and reducing creek erosion by building a bridge at Highlands County Park. 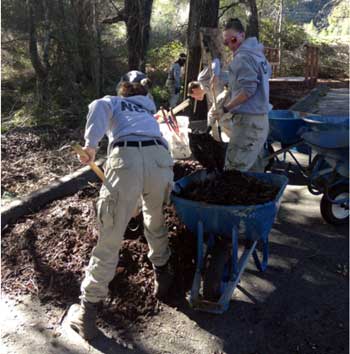 Linda Skeff of Brookdale, Chair of the Environmental Committee’s Restoration Committee, wrote the inspiring grant proposal that brought the AmeriCorps NCCC Team to the SLV, and has been leading their effort the entire time. Our County Parks Department co-sponsored the grant proposal and was crucial to the effort, providing housing for the team as well as other support; Superintendent Gretchen Iliff led their effort. Getting their housing together and helping identify projects, Boulder Creek Recreation District was deeply involved, especially Board Member Diane Hamilton. Dozens of other individuals, organizations and businesses all helped support the effort with food, supplies, educational opportunities and some special recreational events.

Linda tells us that “The arrival of the AmeriCorps team represents the culmination of years of desire and hope to have restoration become an even more important goal of the San Lorenzo Valley communities. The Valley Women’s Club of the San Lorenzo Valley, Santa Cruz County Parks, Boulder Creek Parks and Rec, and the community at large should be acknowledged for their support and education of this team.  Their dedication to this Team will advance the cause of restoration not only here but wherever the team members go in the future.”

Come join in honoring the Blue 6’ers at the VWC General Meeting on Sunday!