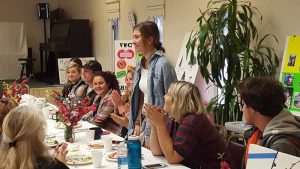 A near-record number of members and visitors attended the 39th Annual Valley Women’s Club Annual Meeting, held at the Highlands Park Senior Center on Sunday, March 12th. Attendees were welcomed by Vice President, Peter Gelblum, and the delicious potluck lunch followed. President Roz Alley gave an overview of the VWC’s 39 years and honored the memory of founding members Ann Wise and Shirlee Byrd. Roz kept the event fast-paced and each Committee report was filled with exciting information. The excitement continued as our remarkable elected representatives, Supervisor Bruce McPherson, Assemblymember Mark Stone, and State Senator Bill Monning, reported on local, regional and State issues that affect us directly. We are grateful to all who attended and renewed their memberships, and welcome the many visitors who became Members that day.