For information on attending the meeting, agenda items, membership, volunteering, or becoming a board member, contact President Alisan Andrews.

2017 Has Been Quite a Year for the Valley Women’s Club! 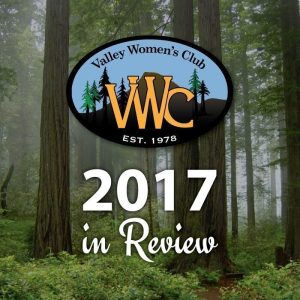 The Valley Women’s Club sponsored and participated with many local organizations to do a lot of great things this year. Many thanks to all of you who help make all of this goodness happen.

The Redemption/Recycling Centers are seeing a healthy recovery from the severe slump of the plastics and metal markets, thanks to Director Matt Harris and his crew: long-time Office manager Danya Leopold, and our Bookkeeper Eva Brunner. Our new baler is now installed at the Ben Lomond Transfer Station and performing well. Check it out next time you go to the dump!

The SLV Habitat Restoration Program, under Linda Skeff’s outstanding direction, brought an AmeriCorps team to the Valley for 9 weeks this past winter. The community warmly welcomed the team of 11 young people who were here to work on local environmental projects. They removed 120 cubic yards of tire chip, 1000 blackberry crowns, and other invasives. They also took out 7844 feet of rusty barbed wire at Quail Hollow Ranch and installed 114 feet of split-rail fencing. Other team project sites included MCR, Garrahan Park, Junction Park and the Estuary Re-vegetation Project with Jane Mio. We hope for continued community support for the 2018 AmeriCorps Team; and for the long-range plan for the Program.

Our 39th Annual General Meeting and Pot Luck March 12th at Highlands Park Senior Center was a huge success. We had over one hundred folks in attendance! Assembly Member Mark Stone, State Senator Bill Monning, 5th District Supervisor Bruce McPherson, and Congresswoman Anna Eshoo’s Aide Fabiola Martinez reported on local, regional and State issues that affect us directly. There were reports from the VWC Committees, and Connie DeNault unveiled her new Legacy of Trees donation program – which has already been very successful! We also honored the memory of Shirlee Byrd and founding member Ann Wise.

In March and May, Roz Alley and the Education Committee had the happy task of giving Ready for School Bags to the Valley’s incoming kindergarten and TK kids at SLE and BCE. Roz also awarded three Scholarships to SLV students going on to Cabrillo, as well as the Deborah Ann Albright STEM Scholarship, and the biennial Alice Earl Wilder Scholarship.

A wonderful group of about 60 VWC volunteers gave their all at the Redwood Mountain Faire – and we can’t thank them enough! The parking lot and clean up-crews, beer and wine sales and our front gate folks contributed hugely to the fun of the Faire. The hours the VWC volunteers worked are highly valued and key to many of our club’s success stories and financial strength.

Our busy summer included social events such as a marching contingent in the Boulder Creek 4th of July parade led by Seth from the BC Recycling Center, and an Ice Cream Social in August at Highlands Park. There was lots of tasty ice cream donated by local markets; sweet harmonies by a cappella singers Three in a Chord, and a kids’ Recycling Olympics held by Connie to run off the sugar rush! Also in August, Park Hall was the setting for our third Isadora Duncan Dance Workshop led by talented dancer and educator Lois Flood.

Board President Roz Alley stepped down in August and Sheila De Lany was elected to finish the term; Peter Gelblum is our Vice-President. Sanda Spiegel will be heading the effort to build up the Community Grants Program, Maggie Barr will be taking over as Treasurer, and Alisan Andrews will head the Membership Committee.

Causes: The Felton Meadow Project. We are pleased that Mt. Hermon withdrew their application for developing the Felton Meadow just before the expected release of the Draft EIR for the proposed Adventure/Bike Velocity Park. The Meadow is such a precious area of woodlands and wetlands, and provides an amazing viewshed for the entrance to our beautiful Valley; it deserves to be protected.

September’s 31st Annual River & Road Cleanup drew 101 local and over the hill volunteers ranging from toddlers to 90+ year-olds! Families, Scouts, individuals, old Cleanup hands and new, pulled in three tons of trash – including 20 large zip-lock bags packed with hundreds of cigarette butts – and 850 pounds of recyclable metals and glass. Thanks to all who staffed the tables in Felton, Ben Lomond, and Boulder Creek; to County Public Works driver, Shane Hommel; and to SLV Water District’s truck drivers, Ben Viramontes and Howard Oliphant, who loaded and delivered materials to the Transfer Station, where the County provided free disposal. Several dozen photos of the event, featuring many of the volunteers – and some remarkably awful trash – are posted on the Valley Women’s Club’s Facebook page!

The 18th Annual Scholarship Rummage Sale was held as always under Hilary Stanley’s deft direction. Thanks to those who donated and arranged items and to the astute shoppers who carried their treasures away, the sale brought in almost $1000 for Cabrillo-bound SLV scholarships. Hilary is looking at mid-May for the 2018 sale – start saving your donations!

Jackie Sommers’ “The Air Around Us” event at Ben Lomond Park was co-sponsored by the VWC with the Monterey Bay Air Resources Board, to benefit Valley Churches United’s program to provide clean, dry cords of firewood to those who cannot afford them and might have to use other combustibles to fuel their stoves. $1000 was raised toward the program.

On October 21st the Environmental Committee Town Hall in Felton with Assembly Member Mark Stone brought people together to hear about environmental issues at the State level that are directly impacting us in the San Lorenzo Valley and the county. An excited and engaged audience asked dozens of hard-hitting questions, as well as gathering information from the resource tables.

The Hammer-Marcum Award event October 22 celebrated two of our community’s outstanding volunteers: Eric Hammer and Kevin Foster. Highlands Park Senior Center was full of love and laughter from the large crowd, lovely fresh decorations by Towhee and Olive Nelson Huxley, harmonies by Three in a Chord, and a bounty of delicious desserts by Jeri Oneto and Renee Kuehl. Speeches and proclamations abounded as we honored Kevin, who among many other accomplishments, started the Boulder Creek Family Network; and Eric, who has given so very much support to the Valley and to the Faire, and is our first multi-generational awardee!

Due to Barbara Hanson’s successful nomination, the VWC received a “Be the Difference” Award from the Santa Cruz Volunteer Center on October 27th as a volunteer-based organization. Barbara has also been inspired to start a Valley Women’s Club Volunteer Corps – the VWC VC. Check out our Facebook and web pages for more on this exciting project in the future! Barbara also leads the Caregivers Support Group, which meets regularly at the Highlands Senior Center.

A large number of VWC volunteers were Halloween Crossing Guards for the Boulder Creek Downtown Trick-or-Treat, helping keep the kids safe – and getting to see all the amazing costumes!

On December 7 the VWC sponsored Dyane Harwood’s talk and discussion on “How to Live Well With Mood Disorders” at Park Hall. Board member Hope Schachter introduced Dyane to the audience of about 40 people.

We look forward in 2018 to our 40th Anniversary, to a larger Board, more activities, and to more involvement with our Valley community! Come and join us!