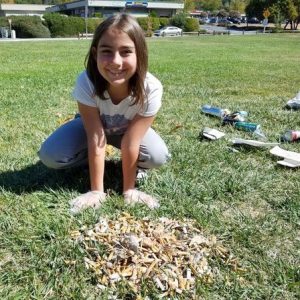 The 33rd Annual SLV River & Road Clean Up volunteers enjoyed a sunny morning and hot afternoon for their daunting task of removing trash and recyclables from along the San Lorenzo River and its creeks, as well as nearby roads. 105 volunteers, ranging in ages from four to over 75 years, ventured out to clean up along road and waterways before the rains come and wash it down River to the Bay. Most returned with bags of cigarette butts and detritus – and then went back out for more.

Worried about the health of the River and its creeks, volunteers worked to pick up hundreds of cigarette butts, knowing they are extremely toxic to animals, especially those that inhabit the riparian areas. Other large items, from pieces of metal to sofa pillows, contributed to the total weight of trash and recyclables of over 2,000 pounds. 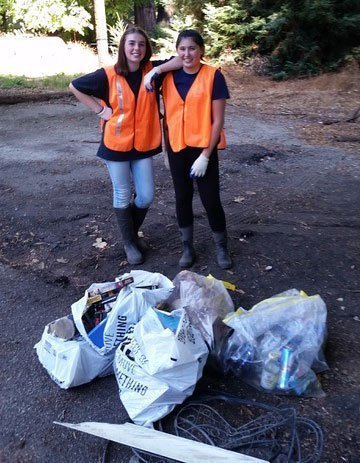 In Felton, early volunteers included students, Boy Scouts, a Superior Court Judge (Ari Symons), new folks in town and the amazing Felton Street Team. Through the morning and into the afternoon, a total of 67 volunteers came to the Covered Bridge check-in area, staffed by Valley Women’s Club organizers and a team of Save Our Shores volunteers and, for the first time, representatives of the Tobacco Education Coalition who distributed information and counted the cigarette butts. Student Emily Lopez of Lompico brought in over 700 butts. By the end of the day, the Santa Cruz County Public Works’ truck was very full for its trip to the Ben Lomond Transfer Station, where the County provided free disposal.

The Ben Lomond and Boulder Creek volunteers included both Boy Scouts Pack 623 and some Girl Scouts, along with families that return every year. Bringing in the largest amount, from multiple trips along Bear Creek Rd., friends Kelsey McCabe and Caroline Ketchum, with the support of Mom, Baya Ketchum, brought in a record total of 530 pounds of materials!

The San Lorenzo Water District provided a large truck with two employees who brought in all the materials from Boulder Creek and Ben Lomond. “We couldn’t do it without them and the County,” said VWC organizer, Nancy Macy.

The Annual Cleanup event has been organized by The Valley Women’s Club since 1986, partnering with the SLV Water District and Santa Cruz County since then, and with Save Our Shores for the past ten years. Lompico Community Center held its 34th annual clean up the same day.

Volunteers promised to do regular clean-ups in their neighborhoods, and reminded everyone, “Don’t wait for a year to help protect your waterways and their wildlife from the impacts of cigarette butts, plastics, and other debris’ contamination. Help protect the River year-round.”